Do you have fear of heights?

If you are scared of heigths I would advise you not to watch the following video:

500 Fifth Avenue, a 60-story office skyscraper at the corner of Fifth and 42nd Street, was built in 1930. Movietone sound cameras visited the construction site that summer and brought back some dizzying views from the top.

Safety was something they never heard of in those days.

Fascinating I think, but even you gave me a million dollars I would not go up there like these guys? How about you?

Yeah I have a major fear of heights. I watch those old videos of the New York skyscrapers and feel dizzy just looking at them. I couldn't go up there for a million either because I know I'd get so faint and scared that I'd fall.

Everytime I see a movie or old news clip of these giant skyscrapers being build and the workers are just sitting on the 50th story eating their lunch, I'm just so fascinated. I'm jealous too because that looks amazing! I would love to do that! I mean I wouldnt want to fall but I would love that experience.

No actually, I'm not so bad with heights. I occasionally get a little nervous when I'm in a plane and it takes off.

I am weirdly scared of it like I am not scared of going up, but when I look down I just get a strange feeling, and it's not fear it's just annoying like it makes me wanna jump out. Well, I guess that would be a yes. I can still go in planes n stuff and don't mind sitting near the window.

Yes, I do. I get very scared once I get so far up. I do not even like climbing on a ladder!

100%. I hate being up high. Like, looking out of a window on the third or fourth floor (or higher) of a building is really scary for me.

Eddie88 said:
No actually, I'm not so bad with heights. I occasionally get a little nervous when I'm in a plane and it takes off.
Click to expand...

Do you know that fear of hights has nothing to do with flying?

Silver Surfer said:
Do you know that fear of hights has nothing to do with flying?
Click to expand...

Oh I am curious now, but how isn't it connected? Like is it just because it's more of a claustrophobic type of fear or? I don't understand it, my dad is afraid of hights and flying and if I can get him on the plain by explaining to him that he shouldn't be scared cuz it ain't the hights I will be thrilled.

Shole said:
Oh I am curious now, but how isn't it connected? Like is it just because it's more of a claustrophobic type of fear or? I don't understand it, my dad is afraid of hights and flying and if I can get him on the plain by explaining to him that he shouldn't be scared cuz it ain't the hights I will be thrilled.
Click to expand...

My first word on this planet was not mammy or daddy as usual, but plane.
My mother told me that before I could even walk I used to crawl outside and point to the sky saying the only word I knew: plane.
I was fascinated by planes and later there was no question about, I was going to be a pilot.

I was 8 or 9 and climbed on a ladder. To my shock and horror I discoverd that I had fear of heights.
That was the end of all my dreams, because I could never be a pilot now.

So I chose a totally different career and ended up being a computer programmer. Years later, I was 27 at the time I was invited by my nextdoor neighbour to come with him to the local airfield on Saturday, because he was an enthousiastic glider pilot.

As I was still fascinated by planes I went with him to see all the action close up. It was a very nice day and by the end of the afternoon one of the instructors asked if I wanted to come with him for a short flight. For a moment I sort of forgot my fear of heigths and was so thrilled because of a whole day on the airfield that I said yes.

When the canopy closed I all of a sudden remembered my fear of heigths, but by that time it was too late.

This glider was pulled up by a cable and before you know it, you're sort of laying on your back, because it is very steep. Like on the following picture. 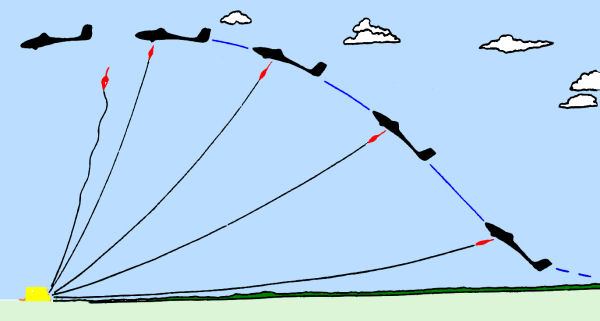 But then all of a sudden, the cable gets detachted, the plane is in a normal position again and you're flying. And it was then that I all of a sudden realised that I had absolutely no fear of heigths. Nothing whatsoever, I was enjoying the vieuw, and as soon as we landen I became a member of the gliderclub.

Two months later I transferred to planes with an engine and spent the next four years getting all my pilots licenses, It was costly, I needed another mortgage on my house, but I did not care. At the age of 27 I could finally start studying for what I always wanted to be.

That also answer your earlier question: no, 27 is not too old to start a new study.

But, I still have fear of heigths, There's no way I will climb on a ladder. So, tell your dad the he has nothing to worry about in a plane and he probably will enjoy it. But don't push him up a ladder.

You must be a member in order to leave a comment. Members see no ads!

Would you go bungee jumping/skydiving?